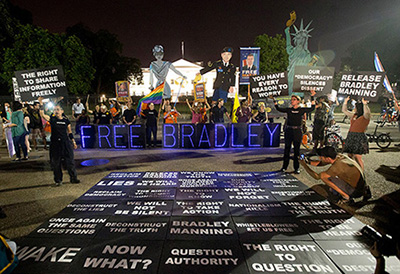 On Thursday, August 22, 2013, a day following the sentencing verdict for the court-martial of United States v. PFC Bradley E. Manning, PVT Manning, who has experienced gender dysphoria and gone through a process of gender questioning and exploration for years, announced that she would like to begin to be known publicly by the name of Chelsea Elizabeth Manning, pursue hormone therapy and be referred to with female pronouns.

While PVT Manning wants supporters to acknowledge and respect her gender identity as she proceeds into the post-trial state of her life, she also expects that the name Bradley Manning and the male pronoun will continue to be used in certain instances.  These instances include any reference to the trial, in legal documents, in communication with the government, in the current petition to the White House calling for clemency, and on the envelope of letters written to her by supporters.  She also expects that many old photos and graphics will remain in use for the time being.

In response to PVT Manning’s announcement, the Bradley Manning Support Network is changing its name to the Private Manning Support Network, and will work on changing other frequently used parts of its website and materials to incorporate the name Chelsea and the female pronoun.  However, completing this process may take some time.

The Support Network has played an important role in organizing public support for PVT Manning since her arrest, and in raising funds to cover 100% of her legal fees.  The Support Network will continue its political advocacy efforts to support PVT Manning through this new phase of her life by raising money for the appeals process, advocating for clemency from the Convening Authority and the President and supporting PVT Manning’s right to appropriate medical treatment while imprisoned.

Thank you all for supporting our efforts over the years.  The fight for PVT Manning’s freedom is far from over, but we take hope from the many caring and compassionate people who have taken time out of their day to write to her, to sign petitions, to attend the court-martial and to join protests and other actions around the world.  We hope you will help us continue this important work to bring truth and transparency to the forefront of America’s conscious.  And we hope you will continue to support PVT Manning, a humanist that we have already learned a great deal from, and who we believe still has much to offer this world.