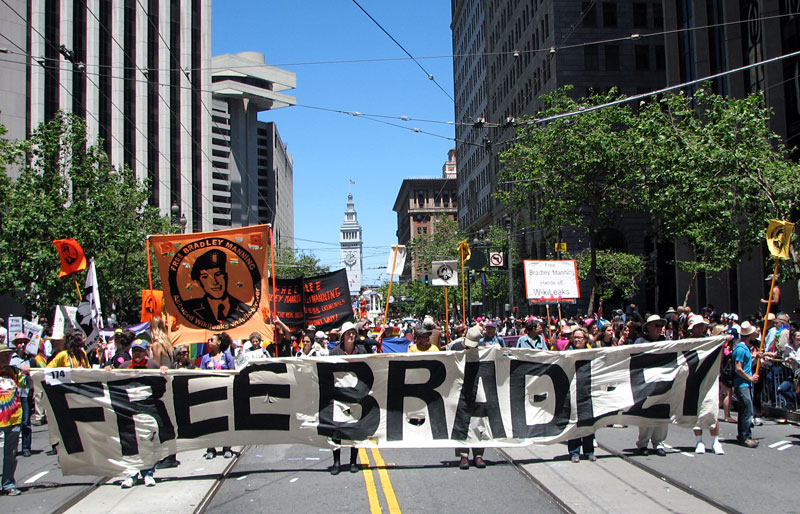 Update 4/27 4:05pm: Unfortunately, the SF pride board now disputes the original public announcement of Bradley as grand marshal.  It seems he was a top candidate in the electoral college’s election, but unfortunately may not have won the election after all.  While this news is disappointing, we appreciate the LGBTQ community leaders who nominated and voted for Bradley in the first place.

This year’s SF Pride Parade will be held on June 30.

This Wednesday, the San Francisco LGBT Pride Celebration Committee announced that openly gay Army whistleblower PFC Bradley Manning will be honored as a grand marshal for the largest gathering of LGBT (lesbian gay bisexual transgender) people and allies in the United States. SF Pride describes its grand marshals as “individuals and organizations that have made significant contributions to the lesbian, gay, bisexual, transgender community.”

A group of past grand marshals selected PFC Manning as this year’s sole honoree, bestowing one of the LGBT community’s highest accolades on the soldier who helped reveal unpunished war crimes, the Pentagon’s link to Iraqi torture (as publicized in a recent UK Guardian documentary), and other disturbing and previously secret foreign policies.

The LGBT community is unique in that being a member requires a willingness to disclose the truth about ourselves to the benefit of those around us and society as a whole. As a longstanding Manning supporter, I’m thrilled to see our community publicly embrace his courage in disclosing classified truths about the war in Iraq and other facts which empower the American public to promote smarter future policy.

PFC Manning, awaiting trial for three years behind bars, cannot attend the Pride celebration in-person.  However, Pentagon Papers’ whistleblower Daniel Ellsberg will attend in his stead, and hundreds are expected to march in support of PFC Manning in the parade. In past years, Manning pride contingents have marched in New York City, Chicago, Washington D.C., Boston, San Diego, and Los Angeles.  Even wider national support is expected this year, in anticipation of his summer court martial.

In late February, PFC Manning plead guilty to 10 charges concerning unauthorized use and disclosure of classified information, explaining his desire to promote “debates, discussion and reforms” concerning U.S. foreign policy.  Those 10 charges alone would carry a maximum prison sentence of 20 years; nonetheless the U.S. military continues to pursue a life sentence in prison for “aiding the enemy through indirect means.”

Supporters argue that without evidence of any damage done to U.S. national security, this is primarily an attempt to frighten other would-be military whistleblowers.