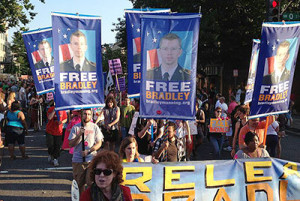 Please join us in what will likely be the last internationally coordinated show of support for Bradley before military judge Col. Denise Lind reads her final verdict–which we expect some time in August.

On July 26 there will be a rally for Bradley Manning in Washington, DC in front of Maj. General Buchanan’s office. Buchanan is the new convening authority in the trial and he has the power to reduce any possible sentence given to Bradley should he be found guilty.

The July 27 ”International Day of Action” coincides with the anticipated sentencing phase of Bradley’s trial. The outcome of that phase of the trial will result in Bradley receiving any outcome from time served to life in prison.

The end of July also marks the third anniversary of the release of the Afghan War Diary which revealed the realities of pain and abuse suffered by many thousands in Afghanistan.

A thousand supporters marched on Fort Meade at the start of  Bradley Manning’s trial. Now we are asking supporters to organize events in communities across the globe. Don’t see your event listed?  Consider holding a small vigil, organizing a letter-writing campaign to Maj. Gen. Buchanan’s office, or handing out flyers and collecting petition signatures at a local community event.  You can register your action on our website.

Contact campaign organizer Emma Cape at [email protected] if you are interested in organizing a solidarity event or action in your community. Help us send a message to Judge Lind that millions stand with Bradley!