With Bradley Manning’s court martial in full swing, Bradley Manning contingents marched in PRIDE parades around the country and world. Supporters organized street theatre performances, parade floats, and in SF an airplane swooped over the event carrying a Free Bradley Manning banner! All this public support for Bradley has sent a clear message: Bradley Manning is a heroic whistleblower, and enough is enough – he must be set free! The military cannot get away with having persecuted a gay soldier who did the right thing. Exposing war crimes is not a crime! Free Bradley Manning! 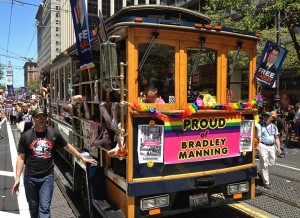 In San Francisco, Bradley Manning supporters made up the largest non-corporate sponsored group, consisting of well over a thousand people. Courage to Resist reports:

The contingent featured dozens of supporters riding a trolley car, the Brass Liberation Orchestra marching band, and a synchronized dance group doing a routine to Michael Jackson’s ‘They don’t care about us’. High above Market Street, an airplane dragged a banner reading ‘Our LGTBQ Hero – Bradley Manning’.

In New York City, the Bradley Manning contingent included a street theatre performance with a large moving jail cell and an actor playing Bradley Manning inside it. The theatre performance was organized by playwright Claire Lebowitz. Members of Veterans For Peace also joined the march. Elias Holtz, an organizer from the NYC Pride contingent writes:

… it wasn’t my crush that motivated me to spend over two months organizing a big group of queers (and allies) to march for Bradley in the New York Pride Parade.

I was motivated more by the fact that Pride would come while Bradley was on trial and would be a huge opportunity to show that the LGBT community stands with Bradley and his actions. I knew that we could rally tens of thousands behind his case in New York City alone. LGBT people know how brave one has to be to speak the truth. We back up people who speak out.

The effort became national, and we coordinated with #BradleyPride contingents in Chicago, Minneapolis, Seattle, and San Francisco.

In Chicago, the Gay Liberation Network initiated a “Free Bradley Manning” contingent in this year’s Pride Parade in Chicago — as an opportunity to spread the anti-war message and to defend civil liberties. 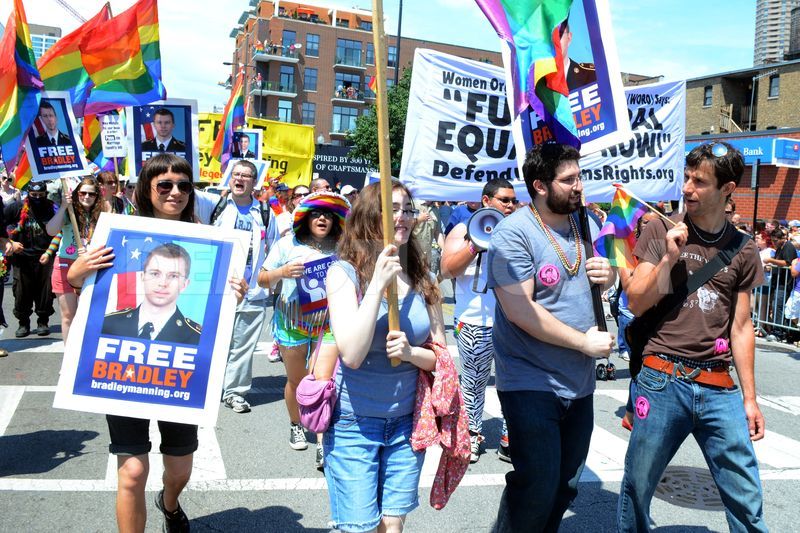 Marching for Bradley in the Chicaco Pride Parade

In Seattle, the Bradley Manning contingent was placed right near the head of the parade, third from the start.

In London, Queer+ Friends of Bradley Manning organized a contingent in support of the heroic whistleblower. Supporters marched behind a hand painted banner, while handing out more than 4000 flyers and thousands of stickers.

And at the Twin Cities Pride parade a photo booth was setup for people to take “I Am Bradley Manning” photos.