Recently, it was announced that PFC Bradley Manning would be a grand marshal of the 2013 San Francisco Pride Celebration. We felt this decision was a bold and uplifting choice, bestowing a great May honor on a young whistleblower being persecuted for following his conscience.

Much to our disappointment, two days later SF Pride board president Lisa Williams issued a separate announcement that the SF Pride board would not be honoring PFC Manning as a grand marshal after all.  It appears the SF pride board’s reversal was affected by criticism from a recently formed gay military rights group.

We want the world to know that the SF Pride board’s decision is not reflective of the LGBTQ community as a whole, and that many of us proudly celebrate PFC Manning as a member of our community.  Unfortunately, the statements by Williams, and the group which originally advocated against PFC Manning as grand marshal, continue to perpetuate certain factual inaccuracies with regards to the military prosecution against him. 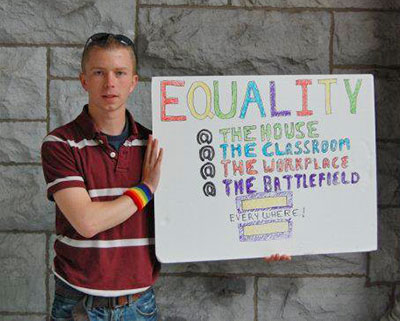 Bradley Manning, while on active duty, at a Washington DC Pride march, summer 2009

The first inaccuracy would be that PFC Manning did not advocate for gay rights.  In fact, while serving in the military, PFC Manning experienced harassment and physical assault because of his perceived sexuality.  He responded by marching against Don’t Ask Don’t Tell in the DC pride parade, where he spoke to reporters about his position, in addition to attending a fundraiser with Gavin Newsom and the Stonewall Democrats so he could discuss the issue of homophobia in the military.  He told a friend in February of 2009 that his experience living under DADT and experiencing the oppression that entailed helped increase his interest in politics more generally.

LGBTQ activists fought hard for years to win the right to live free from the fear that we could be targeted with violence deemed acceptable to society at large, simply for being who we are.  We members of the LGBTQ community would like to stand in solidarity with others around the world who still must live in fear of violence and oppression, simply for being born into a particular group.

Contrary to SF Pride Board president Lisa Williams’s claim, no evidence has been presented that PFC Manning’s actions endangered fellow soldiers or civilians.  In fact, the military prosecution has successfully argued in court that it isn’t required to provide such evidence, and former State Department spokesperson P.J. Crowley continues to insist that the “Aiding the enemy” charge is unwarranted.

In a February 28, 2013, court statement, PFC Manning detailed the due diligence he performed prior to releasing materials to ensure this lack of harm, in addition to explaining,

“I believed the detailed analysis of the [Iraq and Afghanistan war log] data over a long period of time by different sectors of society might cause society to reevaluate the need or even the desire to even to engage in counterterrorism and counterinsurgency operations that ignore the complex dynamics of the people living in the affected environment every day.” 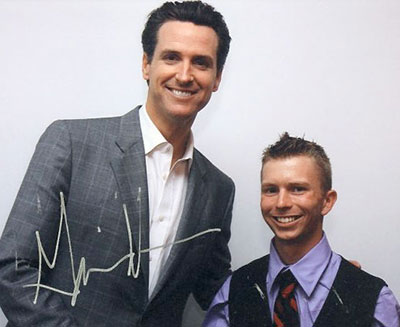 Bradley Manning attending a fundraiser with Gavin Newsom and the Stonewall Democrats, summer 2009.

The truth is that President Bush and VP Cheney’s aggressive wars in the Middle East endangered far more LGBTQ service members and civilians than any Army whistle-blower.  Unlike PFC Manning, however, they have never served prison time, and likely never will.

Millions of people around the world support Bradley for the personal risk he took in sharing realities of complicated U.S. foreign conflicts with the American people.  He is the only gay U.S. serviceperson to be nominated three times for the Nobel Peace Prize.  In joining the Army, soldiers take an oath to protect the U.S. Constitution, and we believe that by his actions PFC Manning strengthened our democracy, and fulfilled that oath to a greater degree than most enlisted.

We are proud to embrace PFC Bradley Manning as one of our icons, and intend to march for him in pride contingents across the country this year, as we have in years past.  We think Bradley Manning sets a high standard for what a U.S. serviceperson, gay or straight, can be.

Organizations listed for identification purposes only