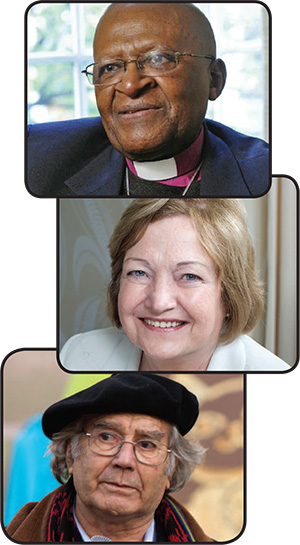 By Archbishop Desmond Tutu, Mairead Maguire and Adolfo Pérez Esquivel. November 14, 2012. As published by The Nation and The  Guardian (UK)

Last week, PFC Bradley Manning offered to accept responsibility for releasing classified documents as an act of conscience – not as charged by the US military.  As people who have worked for decades against the increased militarization of societies and for international cooperation to end war, we are deeply dismayed by the treatment of Pfc. Bradley Manning.  The military under the Obama administration has displayed a desire to over-prosecute whistle-blowing with life-in-prison charges including espionage and “aiding the enemy”, a disturbing decision which is no doubt intended to set an example.

We have dedicated our lives to working for peace because we have seen the many faces of armed conflict and violence, and we understand that no matter the cause of war, civilians always bear the brunt of the cost. With today’s advanced military technology and the continued ability of business and political elites to filter what information is made public, there exists a great barrier to many citizens being fully aware of the realities and consequences of conflicts in which their country is engaged.

Responsible governance requires fully informed citizens who can question their leadership. For those citizens worldwide who do not have direct, intimate knowledge of war, yet are still affected by rising international tensions and failing economies, the WikiLeaks releases attributed to Manning have provided unparalleled access to important facts.

Revealing covert crimes in Iraq and Afghanistan, this window into the realities of modern international relations has changed the world for the better. While some of these documents may demonstrate how much work lies ahead in terms of securing international peace and justice, they also highlight the potential of the Internet as a forum for citizens to participate more directly in civic discussion and creative government accountability projects.

Questioning authority, as a soldier, is not easy. But it can at times be honorable. The words attributed to Manning reveal that he went through a profound moral struggle between the time he enlisted and when he became a whistleblower. Through his experience in Iraq, he became disturbed by top-level policy that undervalued human life and caused the suffering of innocent civilians and soldiers. Like other courageous whistleblowers, he was driven foremost by a desire to reveal the truth.

Private Manning said in chat logs that he hoped the releases would bring “discussion, debates and reforms” and condemned the ways the “first world exploits the third.” Much of the world regards him as a hero for these efforts toward peace and transparency, and he has been nominated for the Nobel Peace Prize as a result. However, much as when high-ranking officials in the United States and Britain misled the public in 2003 by saying there was an imminent need to invade Iraq to stop it from using weapons of mass destruction, the world’s most powerful elites have again insulted international opinion and the intelligence of many citizens by withholding facts regarding Manning and WikiLeaks.

The military prosecution has not presented evidence that Private Manning injured anyone by releasing secret documents, and it has asserted in court that the charge of “aiding the enemy through indirect means” does not require it to do so. Nor has the prosecution denied that his motivations were conscientious; it has simply argued they are irrelevant. In ignoring this context and recommending a much more severe punishment for Bradley Manning than is given to US soldiers guilty of murdering civilians, military leadership is sending a chilling warning to other soldiers who might feel compelled by conscience to reveal misdeeds. It is our belief that leaders who use fear to govern, rather than sharing wisdom born from facts, cannot be just.

We Nobel Peace Prize laureates condemn the persecution Bradley Manning has suffered, including imprisonment in conditions declared “cruel, inhuman and degrading” by the United Nations, and call upon Americans to stand up in support of this whistleblower who defended their democratic rights. In the conflict in Iraq alone, more than 110,000 people have died since 2003, millions have been displaced and nearly 4,500 American soldiers have been killed. If someone needs to be held accountable for endangering Americans and civilians, let’s first take the time to examine the evidence regarding high-level crimes already committed, and what lessons can be learned. If Bradley Manning released the documents, as the prosecution contends, we should express to him our gratitude for his efforts toward accountability in government, informed democracy and peace.