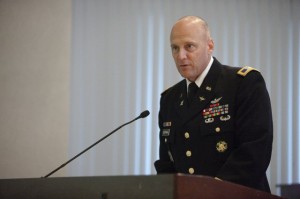 Col. Carl Coffman had a lot of explaining to do today – about 6 hours worth. That’s how long the former Special Court Martial Convening Authority answered questions on the stand, in the second and final day of this week’s motions hearing for PFC Bradley Manning at Ft. Meade, MD.

Both the government and defense called Coffman to testify for the defense’s motion to dismiss for lack of a speedy trial, because Coffman signed off to approve all but one of the government’s requests to delay Bradley’s pretrial proceedings (according to the defense, paralegal Monica Carlile signed one of the delays). The defense accuses the prosecution of requesting delays that could have been avoided, it accuses various government agencies (Original Classification Authorities, or OCAs) who took months to complete classification reviews, and it accuses Coffman of both granting needless delays and unjustifiably excluding them from the speedy trial clock.

The prosecution and Coffman worked together so frequently during 2011 that Coffman referred to “my trial counsel” and to Capt. Ashden Fein by his first name during his testimony. In its questioning, the government had Coffman go through each delay request process to try to stress to the court that it frequently updated Coffman on the OCAs’ progress, it couldn’t have done anything to expedite the OCAs’ extremely long review process, and the classification reviews were necessary to conduct Bradley’s Article 32 pretrial hearing.

The defense has long objected to each of these contentions, and elicited testimony from Coffman revealing that the former Convening Authority actually knew very little about the classification review progress, instead “trusting,” in his words, that “trial counsel and the OCAs were doing their jobs.”

The government’s questioning of Coffman was very methodical, and rather long and dry. Eight times before Manning’s first court session, the prosecution requested a delay, citing the OCAs’ still-unfinished classification reviews. The defense objected to each request, arguing that Bradley’s speedy trial rights were being violated, and that the parties could proceed without waiting for the classification reviews. Coffman testified that he took the defense’s objections into consideration, but he didn’t deny a single government request for delay.

But defense questioning revealed even more about the process: we learned that the prosecution wrote all of its own delay approval memos, on which Coffman simply signed his name, after only 10-15 minutes of discussion with the government.

The problem seems to boil down to this: Coffman “trusted” the OCAs to complete their classification reviews expediently, and he “trusted” the prosecution to provide accurate updates about the reviews that in his mind necessitated delays. But the prosecution didn’t give specific progress updates – for example, that half of the documents were completed, or that they needed a certain number of days to finish – instead, the lawyers would merely tell Coffman that the OCAs were continuing to work and needed more time. (Coffman revealed that despite providing him with verbal or informal updates about the classification process, the prosecution missed its deadline to update him in writing on multiple occasions.) Coffman testified that he made no effort to contact or hurry the OCAs himself, saying that because OCAs are “senior officials,” he expected them to do their jobs without needing to be reminded to quicken their work. He couldn’t explain further why he never inquired about how many OCAs there were, how many documents they needed to review, or how much more time they needed.

How long could this have gone on? If the OCAs were still completing those reviews today, would Bradley still be awaiting arraignment? Coffman said he had no deadline in mind: the only time frame he considered problematic was the potential event that the pre-arraignment period continued until the summer of 2012, when Coffman was expecting to change positions, and didn’t know how to proceed in that event.

But even further questioning challenged the idea that Coffman had to wait for the classification reviews at all. In each objection, the defense proffered that instead of waiting on OCAs to complete reviews, the prosecution could have provided summaries or substitutes of the classified material. Coffman rejected this idea repeatedly, saying he needed the reviews to proceed, despite the defense’s multiple demands for a speedy trial.

Coffman also talked about Op Plan Bravo, the plan to prepare Ft. Meade’s logistics and security for PFC Manning’s trial, given the expected media attention and classification information to be discussed. The plan took 30 days, but Coffman didn’t order it until November 16, 2011, so Ft. Meade was ready by the December 16 hearing. But this plan didn’t depend on any classification reviews, and Coffman acknowledged it could have been executed months or a year prior. This is important because the defense requested the Article 32 hearing start on December 12, and Coffman rejected that date because Op Plan Bravo was still in effect. That’s four more days of senseless delays, four more days of Bradley’s already grueling pretrial confinement, and four more days that should count against the government on the speedy trial clock.

When asked flat out by the defense whether he ever considered denying the prosecution’s delay request, Coffman said no. When asked if he ever considered granting the delays but not excluding them from the speedy trial clock, Coffman said no. Despite his stated concern for Bradley Manning’s constitutional right to a speedy trial, Coffman decided that trusting government officials to act expediently was sufficient due diligence on his part.

Judge Lind asked Coffman, who joined the case August 3, 2010, between the first set of charges against Manning on July 5, 2010, and the second set on March 1, 2011, if the newly discovered information and charges played any part in the delay. Coffman seemed to know nothing about how that new information was discovered and how it led to new charges. He said he only conferred with the prosecution for status updates.

She also asked when Army CID completed its investigation, because the CID’s completion of a review was another, though comparatively minor, basis for delay. Coffman answered that he wasn’t sure exactly, but that he could provide a date. This ruffled the prosecution’s feathers. Government lawyer Ashden Fein got up quickly to re-direct questioning to Coffman. He asked if Coffman was aware that Army CID was “still investigating this crime,” and Coffman said, “No.” Fein asked if Coffman was aware that WikiLeaks was “still releasing classified information,” and Coffman wasn’t sure. (A federal judge also said this week that the investigation is still ongoing.)

Perhaps because this was a speedy trial hearing, this session was the first in recent months that didn’t delay the court calendar to come: all dates currently scheduled remain intact, so we’ll return for the Article 13 litigation and continuation of this motion at Ft. Meade November 27 through December 2.

2 thoughts on “Notes from the courtroom: Bradley Manning’s motions hearing at Ft. Meade, 11/8/12”