Supporters in more than 40 cities take action for Bradley Manning 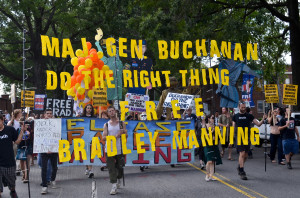 On Friday afternoon, demonstrators marched and blocked the gates of Ft. McNair, Washington D.C., at the office of Maj. Gen. Jeffrey S. Buchanan, Convening Authority for WikiLeaks whistleblower Bradley Manning’s trial.  They carried a large painted version of the van from the Collateral Murder video released by Bradley Manning, a 30 foot U.S. Constitution bearing a classified stamp, and both balloons and a 20-foot banner inscribed with the message, “Maj. Gen. Buchanan, Do the Right Thing.  Free Bradley Manning.”

The event immediately followed closing arguments for the guilt vs. innocence phase of Manning’s legal proceedings, during which the defense argued that Manning is a whistleblower who rightly recognized the problem of unreasonable government secrecy.

Today, July 27, activists in dozens of cities across the world are rallying in solidarity with the Ft. McNair protesters, as part of an International Day of Action for Manning. View the list of events here.

Campaign Organizer Emma Cape, with the Bradley Manning Support Network, explained the significance of the movement to support Manning: “It’s time we reclaim the word ‘patriot.’ The kind of patriot we need today is not someone who defends all of our country’s history and actions, it’s someone willing to stand up for our country’s future, taking risks to ensure it’s a just one. Bradley Manning is such a person.” Also speaking at the event were activists from Yemen and Iraq, veterans who served in Iraq and Vietnam, and a representative from the U.S. Peace Memorial Foundation, which awarded Manning their 2013 Peace Prize. 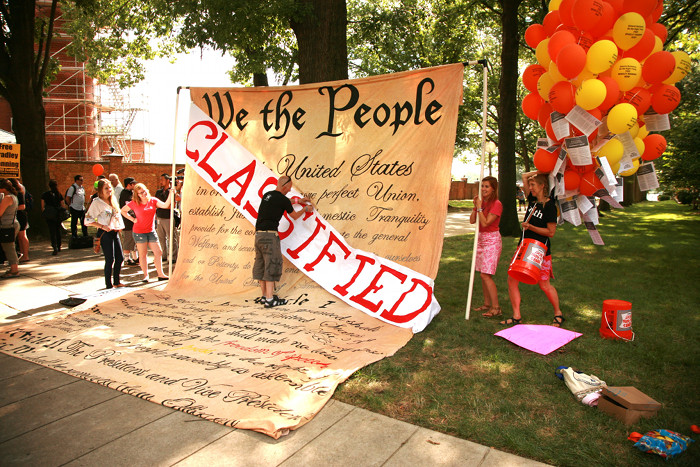 Manning faces a potential life sentence for releasing hundreds of thousands of classified military and diplomatic documents to WikiLeaks because he wanted to promote “debates, discussions and reforms” concerning U.S. foreign policy. He has pled guilty to mishandling classified information, which carries up to a 20-year sentence, but he faces life in prison on charges of Aiding the Enemy, Espionage, computer fraud, and federal theft.

Maj. Gen. Buchanan is the new commander for the Military District of Washington, so he’s the Convening Authority in Manning’s court martial. He will review the case as soon as the trial concludes, and he has the power to reduce any potential sentence Manning receives. Supporters of Manning hope Maj. Gen. Buchanan will take into consideration the numerous deprivations of the young private’s due process rights, including the fact that Manning was held in torturous solitary confinement for nearly a year and detained for three years before his trial began.

Military judge Col. Denise Lind is expected to deliver a final verdict in the coming days, after which the sentencing phase of the trial will begin, with new witnesses, evidence, and arguments.