Support Bradley during his next hearing, July 16-20!

At the April 24-26th hearing, the prosecution introduced a motion designed to ban any discussion of whether harm was or was not caused to the U.S. from future court proceedings.  This would prevent the defense from accessing important evidence in the form of government reports about the impacts of WikiLeaks’ releases. Neither the content nor the conclusions of these assessments have been made public, despite the public’s obvious interest in this information.

The legal argument the government is putting forward to support this motion is as disturbing as the motion itself.  As we previously explained:

The government [prosecution] declared that it does not believe that PFC Manning’s motives, or even whether or not the U.S. was actually damaged in any way by the releases, are relevant to its case for the “Aiding the Enemy” charge.  The government contends that life in prison is warranted for soldiers who release information that hypothetically could be used by the enemy.  The prosecution also considers irrelevant the issue of whether making the information public might benefit citizens of the U.S. or its allies.

While the judge did not rule on this motion at the June 6-8th hearing as we expected, she did say that she would be taking it under legal counsel over the next few weeks.  We think this means she plans to rule at the July 16-20th hearing.

As with previous hearings, we encourage all who support Bradley to attend.  David Coombs, Bradley’s defense lawyer, issued the following statement of gratitude to supporters on June 12th: 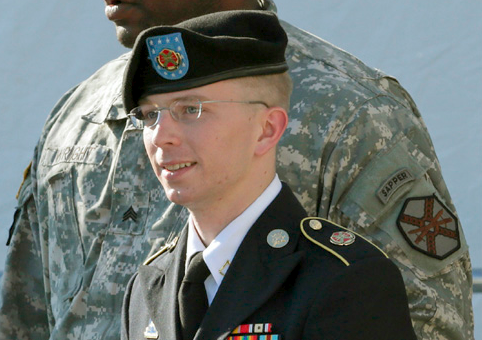 Over the past two years, thousands of individuals have either donated to the defense fund or given freely of their time to support PFC Bradley Manning… At every court hearing, I am given the opportunity to witness this support first hand.  The attendance by supporters during these hearings as been nothing short of inspiring.  Although my client is not permitted to engage those in attendance, he aware of your presence and support… I would like to publicly thank all those who have supported my client over the past two years.  I also want to pass on the following message from Brad:  ”I am very grateful for your support and humbled by your ongoing efforts.”  Brad also asked me to specifically thank on his behalf the unflinching support of Courage to Resist and the Bradley Manning Support Network.  (Read the full statement.)

On July 16th, join the vigil for alleged WikiLeaks source Bradley Manning at the Fort Mead main gate, 8am-10am (Maryland 175& Reece Rd, Fort Meade, MD 21113).  Directions to the Fort Meade Visitor Control Center can be found here.  The hearing itself typically starts at 9am each day, so we recommend arriving at the gate at least an hour beforehand to guarantee entry to the courtroom.  If you arrive later in the day, you will have other opportunities to gain access to the courtroom during recess.

Want to attend the proceedings but can’t afford to do so?  We want to pack the courtroom with dedicated advocates so that we can build a strong team to defend Brad. See if you might qualify for financial support!

Finally, if you are unable to attend the proceedings but still want to take action for Brad, check out our newly-updated Take Action page!  Please be sure to register all support actions at http://events.bradleymanning.org/

3 thoughts on “Support Bradley during his next hearing, July 16-20!”