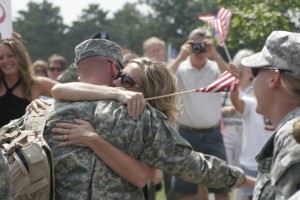 Troops are coming home from Iraq despite the best efforts of the Obama administration to keep them there. “We’re relieved to know all the troops will be home at the end of the year. This would not have been possible without the courageous actions of Wikileaks and the alleged participation of Bradley Manning” says Executive Director of Iraq Veterans Against the War, Jose Vasquez.

Until their abrupt reversal a few weeks ago, the Obama administration had been working hard to maintain between 8000 and 20,000 troops in Iraq after the current Status of Forces agreement was set to expire at the end of this year. Fortunately, the Iraqi government refused to renew the judicial immunity, under which the U.S. Armed Forces had been operating.

Establishment news outlets have largely ignored the reason for this sudden change of plans. A few weeks before the negotiations between Washington and Baghdad reached an impasse, WikiLeaks released a cable providing clear evidence that U.S. forces had been engaged in a cover up of the heinous execution of civilian non-combatants following a raid of a suspected insurgent stronghold.

“A U.S. diplomatic cable made public by WikiLeaks provides evidence that U.S. troops executed at least 10 Iraqi civilians, including a woman in her 70s and a 5-month-old infant, then called in an airstrike to destroy the evidence, during a controversial 2006 incident in the central Iraqi town of Ishaqi.” (link)

There were disagreements between reports from the Iraq government, the American government, and those of a U.N. special raporteur, whose unclassified report and questions to the U.S. embassy in Baghdad were published through WikiLeaks. The embassy cable supported stories told by villagers who witnessed the attack,

“Throughout the early investigation, U.S. military spokesmen said that an al Qaida suspect in Iraq had been seized from a first-floor room after a fierce fight that had left the house he was hiding in a pile of rubble.

But the diplomatic cable provides a different sequence of events and lends credence to townspeople’s claims that American forces destroyed the house after its residents had been shot.” (link)

All of the executed, the article reports, had been handcuffed and shot in the head prior to the building coming down. The cable contradicted the U.S. government’s position, and exposed the military’s and the administration’s unwillingness to investigate documented war crimes. This information created a political crisis in Iraqi politics that made it unacceptable for the Iraqi regime to continue allowing U.S. forces to operate outside of any accountability to human rights law. The Iraqi government was forced to draw a line in the sand that the Department of Defense would not cross. That is why the war is coming to a close. Our government’s well-crafted, amply-financed public relations spin campaign was ultimately no match for the stark reality of what is actually happening on the ground to the people of Iraq.

This decision can be celebrated by Iraqis and Americans alike. Since 2006, Pew research polls have shown a majority of American citizens oppose the war, which has been extremely costly both in terms of domestic dollars spent and plummeting opinions of U.S. policy abroad. Criticisms of the war have not come only from civilians. A Zogby poll in March 2006 found that 72% of US soldiers in Iraq said the war should be ended within a year. A military-commissioned study in 2009 found that a majority of troops deployed to Iraq reported low morale, and other studies have shown up to a third of returning U.S. Iraq War veterans to suffer from depression and/or PTSD.

Our government has a duty to act openly. Insisting on legal immunity for all troops does nothing to sustain respect for ethical soldiers, but instead helps shield irresponsible leaders. Truth and transparency are essential to public debate and decision making. In an analysis of the cable’s impact on the negotiations over whether to extend the U.S. military presence in Iraq, Salon reporter Glenn Greenwald writes, “whoever leaked those cables is responsible for one of the most consequential, beneficial and noble acts of this generation.”

We cannot claim to have a democratic system of government so long as 99% of the public is kept in the dark. We have to know what people in power are doing in order for us to have any chance of holding them accountable. Stand up for those who have had the courage to inform the public of information that they have a right to know. Join the struggle to free WikiLeaks whistle-blower Bradley Manning – not only to secure his freedom, but for the freedom of us all.

One thought on “Truth Enables Peace”