Bradley takes the stand to describe months of abuse 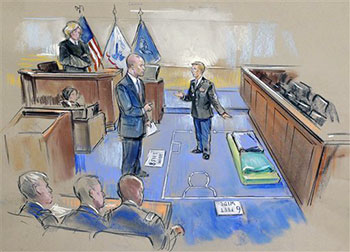 Bradley Manning describes the illegal conditions that he endured at Marine Base Quantico. Courtroom sketch, 11/29/12

Ft. Meade, MD -November 30, 2012 - Yesterday at Ft. Meade, MD, WikiLeaks whistle-blower PFC Bradley Manning testified publicly for the first time.  After occupying the stand over 5 hours for defense questioning,  it was announced that the government’s cross-examination will begin today at 9:30am EST.  Bradley Manning told a detailed story about his pretrial conditions from the time he was arrested and brought to Kuwait, through his nine months of harsh Prevention-of-Injury (POI) watch in the military brig in Quantico, VA , and finally to his experience being transferred to Ft. Leavenworth, KS in April of 2011.

It has been acknowledged by both defense and prosecution that PFC Manning was having suicidal thoughts around the date of his transfer from Kuwait to Quantico.  In his testimony, PFC Manning explained how isolation, restricted sleep and lack of access to current news in Kuwait for his first two months of arrest skewed his sense of time and exacerbated his anxiety and depression.  However, PFC Manning’s testimony mirrored that of the three brig psychiatrists who had already testified, in that he said his mood and state of mind improved beyond thoughts of self-harm shortly after transfer to Quantico.  He said that he resolved to carry on, but that he grew frustrated as he felt nothing he could do would result in being removed from the highly restrictive POI status.

One of the most revelatory moments of PFC Manning’s testimony occurred when he informed the court that Gunnery Sergeant (GYSGT) Blenis, the brig counselor, told PFC Manning that his behavior was exemplary, and that it must be brig psychiatrists who recommended the POI status.  Defense attorney David Coombs proceeded to show the court a video in which GYSGT Blenis says “I wish I had 100 Mannings,” a phrase PFC Manning said Blenis used around him often.  Blenis’s explanation for PFC Manning’s POI status, as related by PFC Manning, directly contradicted all three psychiatrists own testimony about their recommendations that his conditions be relaxed through downgrading his status.

Director of the Center for Constitutional Rights, Michael Ratner, attended yesterday’s hearing and emphasized how impressed he was upon witnessing Bradley’s testimony, “Bradley was dignified, articulate, smart and self-aware.  After two and a half years it was miraculous to finally hear him describe the horrible cages he was in and the egregious conduct of his jailers. What was done to Bradley was inexcusable.  I was deeply moved by his words in a day of testimony that was like an emotional roller coaster. I cannot imagine what he must be feeling, but his incredible sincerity and strength was visible to all. We are lucky to have people with the courage of Bradley Manning.”  More than 20 other supporters also attended the 10 hour hearing, including an Australian diplomat and Government Accountability Project Director and prominent Bush Administration whistle-blower Jesselyn Radack. 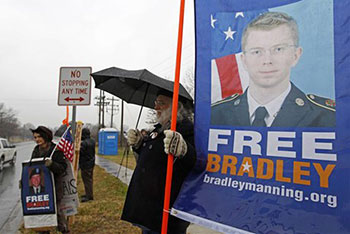 Bob Meola holds a “Free Bradley” banner in the freezing rain during the start of the November 27, 2012 hearing at Ft. Meade.

While the government has argued this week that PFC Manning’s harsh holding conditions met brig regulations, the defense continued arguing the unnecessarily severe nature of PFC Manning’s Quantico treatment with testimony from the garrison commander at PFC Manning’s current prison in Ft. Leavenworth, KS, Lt. Col. Dawn Hilton.  At Ft. Leavenworth, Lt. Col. Hilton testified, Bradley Manning was found through psychological interviews and observation to be a medium security prisoner, meaning he was allowed much greater freedom of movement, interaction with other prisoners, as well as an array of personal items.  She continued that at Ft. Leavenworth, Suicide Watch was the status most comparable to POI, and her goal was always to downgrade prisoners from this status as soon as possible, by working with psychological staff.  She testified that if a detainee’s condition was so severe that prison staff was unable to successfully downgrade their status within a few days, she would next work to have them transferred to a psychiatric ward, rather than remain in prison.  Additionally, she testified that all prisoners were allowed at least 1 hour of outside recreation per day, in accordance with American Corrections Association (ACA) standards; for the first 6 months of PFC Manning’s imprisonment at Quantico, he was allowed a mere 20 minutes of sunlight per day.  Unlike the Quantico military brig, the Ft. Leavenworth garrison is accredited as meeting 100 percent of ACA standards.