The following post was published on the blog of David Coombs, Bradley Manning’s attorney, and includes a link to the Article 13 motion to dismiss charges based on Bradley’s abusive conditions in Quantico, as well as Coombs’ explanation of the motion and various key incidents. This motion will be argued at the motion hearing at Ft. Meade scheduled for October 1-5. 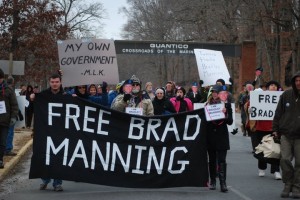 On 27 July 2012, the Defense filed a motion to dismiss all charges owing to the unlawful pretrial punishment to which PFC Manning was subjected while at Marine Corps Base, Quantico.  In addition, on 27 July 2012, the Defense also filed a motion for a continuance based on the late production by the Government of extensive documentation that is “obviously material to the preparation of the defense.”  The motions are found below:

In its Article 13 motion, the Defense argues that a decision had been made early on at Quantico to keep PFC Manning in MAX Custody and in Prevention of Injury (POI) status — in effect, the functional equivalent in solitary confinement.  In January 2011, multiple Brig officials held a meeting where a senior officer ordered that PFC Manning would be held in maximum custody and POI indefinitely.  The senior officer stated that “nothing is going to happen to PFC Manning on my watch.”  He also said, “nothing’s going to change.  He won’t be able to hurt himself and he won’t be able to get away, and our way of making sure of this is that he will remain on this status indefinitely.”  At that point, a Brig psychiatrist became very upset and voiced his concerns, stating something to the effect of, “Sir, I am concerned because if you’re going to do that, maybe you might want to call it something else, because it’s not based on anything from behavioral health.”  In response the senior officer said, “We’ll do whatever we want to do.  You [the Brig psychiatrists] make your recommendation and I have to make a decision based on everything else.”  The psychiatrist responded, “Then don’t say it’s based on mental health.  You can say it’s MAX custody, but just don’t say that we’re somehow involved in this.”  The senior officer said, “That’s what we’re going to do.”  The senior officer made it clear to those present at the meeting that the decision to keep PFC Manning in MAX and POI was coming from those higher in the chain of command.

The Article 13 motion also chronicles the conditions of PFC Manning’s confinement at Quantico.  PFC Manning was placed in a 6×8 cell with no window or natural light.  Owing to his classification as a MAX detainee, PFC Manning was subject to the following restrictions:

Owing to PFC Manning being placed on continuous POI status, he was subject to the following further restrictions:

On two separate occasions, Brig officials elected to increase the special handling instructions on PFC Manning.  The first occurred on 18 January 2011, the day after a protest outside the gates of Quantico.  On that day, Brig guards harassed PFC Manning as they escorted him to his recreation call.  The first guard told PFC Manning to “turn left.”  When he complied, the second guard yelled, “don’t turn left.”  When PFC Manning attempted to comply with the demands of the second guard, he was told by the first, “I said turn left.”  PFC Manning responded, “yes, Corporal” to the first guard.  At this point, the third guard chimed in by telling PFC Manning that “in the Marine Corps we reply with ‘aye’ and not ‘yes.’”  He then asked PFC Manning if he understood.  PFC Manning made the mistake of replying “yes, Sergeant.”  At this point the fourth guard yelled, “you mean ‘aye,’ Sergeant.”  When PFC Manning arrived at the recreation room, he was told to stand still so the guards could remove his leg restraints.  As PFC Manning stood still, one of the guards yelled, “I told you to stand still.”  PFC Manning replied, “yes Corporal, I am standing still.”  Another guard then said, “you mean ‘aye’ Corporal.”  Next, the same guard said “I thought we covered this, you say ‘aye’ and not ‘yes,’ do you understand?”  PFC Manning responded, “aye Sergeant.”  Right after PFC Manning replied, he was once again yelled at to “stand still.”  Due to being yelled at and the intensity of the guards, PFC Manning mistakenly replied, “yes Corporal, I am standing still.”  As soon as PFC Manning uttered his response he attempted to correct himself by saying “aye” instead of “yes,” but it was too late.  One of the guards starting yelling at PFC Manning again, “what don’t you understand” and “are we going to have a problem?” Once the leg restraints were taken off of PFC Manning, he took a step back from the guards.  PFC Manning’s heart was pounding in his chest, and he could feel himself getting dizzy.  A Brig psychiatrist determined that this event was likely an anxiety attack due to the situation.  After his restraints were removed, PFC Manning sat down to avoid falling.  When he did this, the guards took a step towards him.  PFC Manning instinctively backed away from the guards.  As soon as PFC Manning backed away, the guards walked toward him as if to prepare to restrain PFC Manning.  PFC Manning immediately put his hands up in the air, and said “I am not doing anything, I am just trying to follow your orders.”  The guards then told PFC Manning to start walking.  PFC Manning complied with their order by saying “aye” instead of “yes.”  After recreation call, when he was back in his cell, PFC Manning was visited by a senior Brig official.  PFC Manning tried to explain what happened earlier in the day.  He also expressed his frustration at the conditions of his confinement.  The Brig official said “no one will tell me what to do.”  He also said that he was, for all practical purposes, “God.”  PFC Manning responded by saying, “you still have to follow Brig procedures.”  PFC Manning also said, “everyone has a boss that they have to answer to.”  The Brig official then placed PFC Manning in Suicide Risk status, over the recommendation of a Brig psychiatrist. This resulted in PFC Manning being subject to the following additional restrictions:

The second incident where the special handling restrictions were increased arose on 2 March 2011.  On that date, PFC Manning was informed that no relief would be granted with respect to PFC Manning’s previously-filed Article 138 Complaint.  Understandably frustrated by this decision after enduring (at that point) over seven months in unduly harsh confinement conditions, PFC Manning asked a Brig official what he needed to do in order to be downgraded from MAX and POI.  The Brig official responded by essentially telling PFC Manning that there was nothing he could do to downgrade his detainee status and that the Brig simply considered him a risk of self-harm.  Out of frustration, PFC Manning responded that the POI restrictions were absurd.  PFC Manning sarcastically told the Brig official that if he wanted to harm himself, he could conceivably do so with the elastic waistband of his underwear or with his flip-flops. Later that day, Quantico officials increased the restrictions imposed upon PFC Manning under the pretense that PFC Manning was a suicide risk.  PFC Manning was not, however, placed under the designation of Suicide Risk.  In order to keep PFC Manning in Suicide Risk, Quantico would have needed a supporting recommendation from one of the Brig’s mental health providers (which Quantico did not have).  In response to this specific incident, a Brig psychiatrist met with the PFC Manning.  After speaking to PFC Manning, he assessed PFC Manning as a “low risk and requiring only routine outpatient follow-up [with] no need for … closer clinical observation.”  In particular, he indicated that PFC Manning’s statement about the waist band of his underwear was in no way prompted by “a psychiatric condition.”  Rather it was part of his process of “intellectualizing” the conditions of his confinement.  The increase in the special handling instructions resulted in PFC Manning being subject to the following additional restrictions:

On 20 April 2011, after enduring nearly nine months of solitary confinement, PFC Manning was moved to the Fort Leavenworth Joint Regional Correctional Facility.  After a routine indoctrination period, PFC Manning was assigned to Medium Custody (there is no designation of Minimum Custody for pretrial detainees).  The severe restrictions on PFC Manning’s liberty were lifted.  PFC Manning is now permitted to eat with other detainees, socialize with other detainees, walk around without metal shackles, have personal and hygiene items in his cell, etc.  PFC Manning has been held in this status for approximately the past 15 months.

PFC Manning was held at Marine Corps Base Quantico from 29 July 2010 to 20 April 2011.  During this time, PFC Manning was held in MAX custody and under POI status.  In the fall of 2010, the Defense raised the issue of unlawful pretrial punishment with the Government.  On 8 December 2010, the Defense made a discovery request for all documentation from Quantico pertaining to PFC Manning. The Government provided extensive documentation related to PFC Manning’s confinement at Quantico in October of 2011.  The Defense believed that this was the full extent of the information the Government had from Quantico.

These emails reveal that the senior Brig officer who ordered PFC Manning to be held in MAX and in POI was receiving his marching orders from a three-star general.  They also reveal that everyone at Quantico was complicit in the unlawful pretrial punishment, from senior officers to enlisted soldier.

The Defense requested a continuance to file a supplement to the Article 13 motion based on the late production of the 84 emails.  In addition, the Defense filed a discovery request seeking more documentation from the numerous “players” that the Defense did not know were involved in PFC Manning’s custody classification.  The Government has indicated that it is currently looking into determining whether such documentation exists.  The Defense will likely be required to file a motion to compel discovery in order to obtain this documentation.

The oral argument for the Article 13 motion is currently scheduled for 1-5 October 2012.