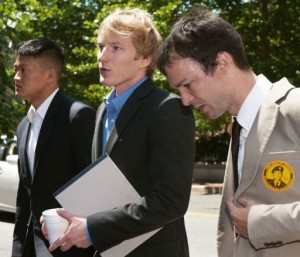 David House (center) outside of the grand jury in Alexandria, VA, last June.

BOSTON — A federal judge ruled late last night that David House, a co-founder of the Bradley Manning Support Network, has sufficient standing to proceed in a lawsuit against the Department of Homeland Security. House argues that government agents violated his First and Fourth Amendment rights when his electronic devices were unlawfully seized during the course of being questioned about his political beliefs at Chicago’s O’Hare airport in November 2010.

United States District Court Judge Denise Casper denied the government’s motions to dismiss the suit, finding that the fact that “the initial search and seizure occurred at the border does not strip House of his First Amendment rights, particularly given the allegations in the complaint that he was targeted specifically because of his association with the Support Network.”

“For the past decade, the two parties in Washington have weakened the ability for citizens to exercise their basic rights and liberties while on U.S. soil,” said David House in response to the decision. “This ruling is important not just for those of us in the Bradley Manning Support Network who have been targeted, but for any American who values their right to free speech. Americans should take heart in the judge’s reaffirmation that politically motivated searches and seizures present an intolerable restriction on our First Amendment freedoms.”

A copy of the ruling is available here.

As a friend of the accused WikiLeaks whistle-blower, House helped to establish the Bradley Manning Support Network in June 2010. During the time he was detained at O’Hare airport, House was never accused of engaging in illegal behavior. As noted in the judge’s ruling:

“…the agents questioned House solely about his association with Manning, his work for the Support Network, whether he had any connections to WikiLeaks, and whether he had contact with anyone from WikiLeaks during his trip to Mexico.”

House’s laptop and other electronic devices, which contained internal communications among members of the Support Network, were seized and retained by the federal government for 49 days.

House is being provided with legal representation by the American Civil Liberties Union and the ACLU of Massachusetts.

“Despite the government’s broad assertions that it can take and search any laptop, diary or smartphone without any reasonable suspicion, the court said the government cannot use that power to target political speech,” said Catherine Crump, staff attorney with the ACLU’s Speech, Privacy and Technology Project, who argued the case along with John Reinstein of the ACLU of Massachusetts.

A copy of the ACLU statement can be found here.

Supporters are preparing for rallies and vigils in support of PFC Manning as he returns for pre-trial hearings at Fort Meade on April 24 and 25.