Seeking greater transparency, Manning’s defense asked to publish its filings online; the government rejected this request, but the defense is working to publish redacted versions instead 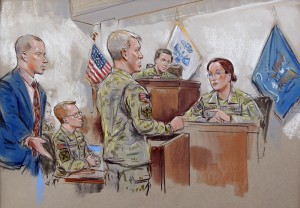 Our office has received several inquires regarding access to court filings by the parties. The Reporters Committee for Freedom of the Press and the Center for Constitutional Rights have both submitted letters indicating that the public is not adequately being informed of the proceedings. Each organization has stated that the lack of accessibility to court filings promotes the perception that issues are being decided behind closed doors. The organizations also believe the lack of transparency undercuts the public’s confidence in the fairness of the military justice system.

The Defense, in an effort to address the above concern, has requested authority to publish its motions and the Government’s responses on our website. The Government has opposed this request. The Court has issued an Interim Order that the Defense may publish appropriately redacted versions of its motions, but only after the Government is provided with an opportunity to review the redacted filings and raise any objection with the Court.

The Defense is currently in the process of redacting the various motions filed at our last hearing on March 16, 2012:

The Defense is also redacting its filings submitted on 29 and 30 March 2012: