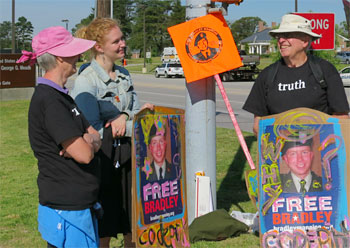 Gathering at Fort Meade Main Gate to back Bradley Manning during hearing, 6/6/12

This motion hearing for PFC Bradley Manning will run from June 6-8, at Fort Meade, MD. Earlier this week, I posted a preview of the defense motions for this hearing.

As they have for each of the last several motion hearings in Fort Meade, the military judge, the defense, and the prosecution met for a private conference from 9-10AM before the courtroom opened for the public. When open session began, Judge Denise Lind first introduced PFC Manning’s newest defense counsel, Major Hurley. She then read him his rights to choose his own counsel, as she has at each hearing.

State Department documents to be turned over, officials to testify

The first motion of the day was the prosecution’s request for the court to reconsider its ruling on the State Department’s assessment of potential damage caused by WikiLeaks releases. Judge Lind previously ruled that the government must produce the assessment for in-camera review, and the prosecution wants her to reconsider because it’s merely a ‘draft,’ not a completed report. Lind ruled that the assessment was sufficiently material to the guilt and the potential punishment for an in-camera review (a private screening for the judge to determine classified information’s relevance), so the government turned it over after May 23.

Then we moved through some of the other agencies from which the defense requests impact reports. Lind ruled next that the government must provide assessments from the Defense Intelligence Agency (DIA) and the WikiLeaks Task Force (WTF), but these are for ex parte review, meaning done for one party only. Due to the classification status of these documents, the judge will redact, substitute, or summarize these reports instead of reviewing them in-camera. A redacted substitute, she said, “strikes a proper balance between the rights of the accused and national security interests.” The defense asked to review the assessments right away, because it had a qualified expert on hand, but the government instead will keep them at DIA headquarters.

Next Lind asked the prosecution if the CIA discovery documents contained Brady material – information relevant to the guilt or sentencing for the defense. Unsure, the government requested a brief recess. Upon return, the prosecution’s Major Ashden Fein said the CIA had produced unclassified documents without Brady material. Lind said the court had conducted an in-camera review for the classified information and found the substitute insufficient. She’ll further review the CIA files for relevant material. Lind asked if there were any new disclosures since the last hearings. Since then, the CIA produced new files, which the court ordered and redacted.

A private, telephonic 802 conference had been held to clarify logistics of those witnesses before today’s hearing – this induced the defense motion to record and transcribe these telephonic conferences, complaining that the government used them as an opportunity to re-litigate previous rulings and then contradicted 802 statements later in court. The government argued that there’s no prohibition on discussing substantive issues in private conferences so long as both parties agree and that recording and transcribing would “prevent expeditious proceedings.” The judge ruled in favor of the prosecution but offered a compromise: instead of private 802 conferences, we could have a single day hearing in between the already-scheduled hearings to sort out minor substantive issues in open court. 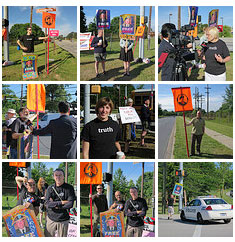 Select image above for photos from Fort Meade, 6/6/12 (Flickr)

Continuing the defense’s second motion to compel discovery, Coombs laid out his extensive argument denouncing the government’s failure to carry out the defense’s requests with “due diligence” and in a timely fashion, reminding of the two years of Brady issues he argued at the last session. The prosecution, he said, first referred to “alleged damage assessments,” then said it couldn’t provide “incomplete damage assessments,” and later said it was “unaware” of the existence of some damage assessments. Then, he revealed, a memo from the Headquarters of the Department of the Army (HQDA) landed incidentally on the desk of Major Kempke – Bradley’s counsel before Major Hurley. The memo, dated July 29, 2011, showed that the prosecution requested Brady material over a year after Bradley was arrested and several months later still, nothing had been done.

Further explaining the government’s lethargic pace, Coombs said he had only recently been made aware of the FBI’s impact statement, which he’d been requesting for nearly two years. He also was only recently made privy to the existence of an ONCIX impact assessment (and that it remains “incomplete). The government, Coombs contended, was inconsistent in its statements on these vital assessments’ existence and completion.

Later memos show that on February 23, 20012, the government said they’d found no Brady material in these damage reports, and yet they’ve continued to search for this material in the last few months. They’re re-searching with a new, correct Brady understanding, but Coombs complains that this has taken far too long.

Coombs announced he has received information from 28 of the 63 agencies he requested damage assessments from. He says these are generally only one to two pages each, claiming either no damage has been caused in those agencies or referring him to another agency where damage could have occurred.

Coombs said House Republican Darrell Issa, chair of the House Oversight Committee, reviewed the Department of Justice and Department of Defense for Bradley Manning-related information last year. Coombs has requested this information, but the prosecution claims his request wasn’t specific enough. Coombs said he couldn’t have been clearer that he wanted Issa’s reports regarding Bradley Manning’s alleged actions and the actions Attorney General Eric Holder has taken in response. Short of saying that the files he wants are “in a red file in Issa’s third drawer, under his Bible,” Coombs said, he couldn’t get more specific. He proposes the court give the prosecution two to three weeks delay to fully comply with his discovery requests, detailing when the government made their requests and how many pages it reviewed. The judge observed this could complicate the schedule, but Coombs said that only this portion of the schedule needed to be suspended temporarily and that the rest could proceed. We broke for lunch, which included an unusual interaction.

In the afternoon, Coombs continued his discovery argument, stressing that just a few months before trial the government had still only provided 12 pages of Brady material.  Reports from the DIA, State Department, ONCIX, CIA, and others remain unproduced or incompletely produced. These 28 agencies that have turned in damage assessments gave merely a snapshot of late 2010 and early 2011 – it’s unclear if they followed up on their reviews. Coombs recounted an 802 conference to determine proper terminology for his Brady request, which the government said was too narrow after he included the term “working papers” but was too broad without it. The government, Coombs says, “looks like it’s hiding something.”

Then Major Ashden Fein delivered the government response, reiterating his claim that the prosecution was turning over all Brady material, and that the defense continued to use overbroad language in its requests. Attempting to flip Coombs’ argument, Fein claimed the prosecution had anticipated the breadth of the charged offenses and sent out a memo searching for relevant documents initially. This search, however, is not the defense’s Brady request.

To determine the current status of the various agencies at issue, Lind ran through each one with basic questions about the prosecution’s authority to search and the results – Is this a “closely aligned entity”? Is it under military authority? What documents has it produced?

FBI: aligned, under military authority, has produced part of a joint investigation on WikiLeaks. Fein says the whole investigation wasn’t produced because only part dealt with PFC Manning and the rest was classified and not relevant to the case. Coombs, however, showed what the FBI had revealed was severely redacted, such that vast sections (30 or more consecutive pages) were blacked out entirely.

DOJ: aligned, not under military authority, had no damage assessment but has grand jury testimony and prosecutorial files. All other DOJ files are contained within the FBI report as they conducted a joint investigation.

CIA: aligned, not under military authority, government is still searching for Brady and has produced other investigative files.

ODNI (Office of the Director of National Intelligence): aligned, part of the military, the parent of several organizations (such as ONCIX), provided targeting information from aforementioned memo and no damage assessment.

ONCIX (Office of the National Counterintelligence Executive): aligned (per the court’s ruling), may produce damage assessments.

A disagreement arose over ONCIX’s damage assessments. Judge Lind asked the prosecution why it failed to acknowledge ONCIX’s ongoing assessment previously. The government contended that ONCIX had a “draft” of an impact report but this was not yet an “interim” assessment or a “final” version and thus wasn’t adequate. The defense wants the assessment regardless of its status, saying it will receive the updated information upon completion but wants to work with what is provided so far.

DIA: aligned, under military authority, the prosecution says the defense hasn’t yet met specific enough requests for this agency, but that no investigative files were found and that others existed related to WikiLeaks that may be related to sentencing but not the merits of guilt. Any damage, Coombs contended, sentencing or not, is discoverable.

Fein replied, “This broad request is an effort to slow the prosecution,” which received audible laughter in the benches, likely because Bradley has been in prison for 745 days.

DISA: aligned, under military authority, in the process of reviewing fewer than 60 documents, mostly of administrative or background information. Fein again said the defense’s request was overbroad, saying they want “any document…” Lind finished his sentence: “…if it’s relevant to the defense.” He looked frustrated, but he agreed. After much circular argument regarding discovery requirements, this marked the first time the prosecution conceded that it had not produced all of the documents it had marked for discovery.

Coombs responded, “The sky’s not falling for the government. We’re not sending them on a fishing expedition. If we were, we’d request many more than these few agencies.”

Finally, Lind introduced the defense motion to request the government identify all of the Brady material in its discovery documents. Lind asked Capt. Tooman, who argued the motion, “In all 400,000 documents?”

Tooman replied, “If they were duly diligent, they’d have done so.” Going forward, though, he requests the prosecution highlight the Brady material, since it’s already marking it separately to produce to the court.

Tooman argued, as I previewed on Monday, that the size of the discovery information, the geographical separation of the defense, and the limited scope of the defense counsel resources made viewing the Brady material together as a legal team very difficult. Fein stood to counter, saying highlighting this material would be doing the defense’s job. He said each lawyer gets a safe for classified information, so they should be able to transport material easily. If they need more lawyers, Fein said, the defense could pay for more lawyers.

Tooman also argued the government gave the defense vast quantities of documents with no searchable or useful index, only Bates numbers as references. The government said this was how it processed the documents and creating an index or providing their internal index to the defense would be doing its work for the defense. The judge will rule on this defense motion later.

Finally, Judge Lind requested both the defense and prosecution give more particular reasoning for how the damage assessments would affect their arguments. At nearly 6:00PM, we recessed for the day.

Please email Nathan Fuller at [email protected] if you have any questions or corrections to make. Stay tuned for continued coverage of Bradley Manning’s motion hearing in Ft. Meade.