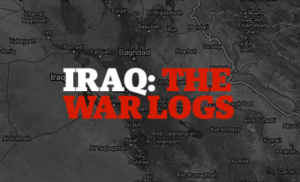 October 22nd was the anniversary of the publication of the Iraq War Logs in 2010.  Check out our write-up about the documents, and share some Iraq War Logs facts with your friends.

Forty tickets are left for Friday’s Bradley Manning benefit with rock-n-roll hall of famer Graham Nash.  We are offering a limited number of half price tickets for L.A. area Bradley Manning supporters.  Try coupon code “brad50.”  Go here to get your tickets now.

HuffPo breaks down the contradictions in U.S. government’s attitude toward classified information.  Release information which embarrasses higher-ups?  Punishment will be severe.  Release information for political reasons supporting the status quo?  Okay.  The article argues that even though NSA whistle-blower Thomas Drake ultimately served no prison time, the harsh charges against him make others in the ever-growing intelligence committee feel afraid to reveal information pertinent to the public good.

National Whistleblowers Center representative Jesselyn Radack writes in the Daily Kos about the government’s case against whistle-blower John Kiriakou.  She explains that he will most likely be going to jail for outing a torturer.  The U.S. government is arguing that national security has been endangered because Guantanamo prisoners (many of whom we know, thanks to WikiLeaks, were innocent) may have learned the name of one of their torturers.  Studying the cases of Drake, Kiriakou and other whistle-blowers, can help us to understand that the prosecution of Bradley Manning fits into a pattern.  A pattern of a government system that discourages questioning and criticism, in the form of severely punishing whistle-blowers who try and engage the public in evaluating policy.

Supporter David Jah Vega created a video to tell the story about Bradley Manning.  Check out his creation on youtube here: