Michael Ratner, president of the Center for Constitutional Rights, is interviewed by WeAreChange.org. He reports on the latest developments in the trial. Listen and watch below!

“It is not only Bradley Manning, but America, that will stand trial next February, or whenever the Pentagon, after years of illegal delaying tactics, decides to bring him to trial” writes Sherwood Ross. He is critical of “amorphous” charges that have been laid against Bradley Manning, particularly that of aiding the enemy, and he wonders how the world will react when evidence of US war crimes is exposed in court. And with Bradley Manning having spent almost 3 years in jail before he reaches trial, how will the court compensate for the prosecutions ignorance of their constitutional obligations to bring him to trial within 120 days? As he points out, David Coombs, Bradley Manning’s lawyer, has called the prosecutions intentional trial delays (mostly by withholding evidence until the last minute, or until forced by the court to do so), “an absolute – ‘mockery of justice’”. (Read more…)

Supporters in Berlin held a vigil  at the US embassy on October 28th. (Read more…) 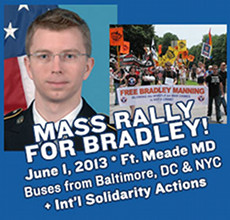