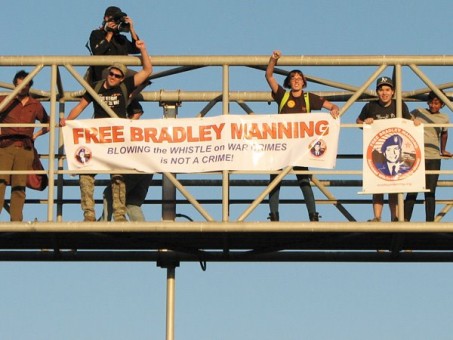 Wednesday of this week staff of Courage to Resist and the Bradley Manning Support Network joined Occupy Oakland’s general strike that succeeded in shutting down the largest port on the west coast. Check out our facebook page for more photos from the event.

After Wednesday’s ruling, Julian Assange has one appeal left before being extradited to Sweden. After losing his most recent hearing he will soon be deported to Sweden where two women have accused him of sex crimes. There are worries that in a politically-motivated move the U.S. may be planning to extradite Assange from Sweden to face WikiLeaks related charges in the U.S.

With the U.S. pressuring Mastercard, Paypal, Visa to block donations to the whistle-blower
organization, it has been difficult for WikiLeaks to raise funds. Last month WikiLeaks issued a
statement saying it would halt publishing until more funds were raised. The CNN article expresses
concern that “the possibility of Assange going to jail will mean the death knell for its operations.”

Jeff Paterson of the Bradley Manning Support Network, was interviewed by CNN about what impact Julian Assange’s case would have on PFC Manning’s case. He said:

“I hope WikiLeaks is more than just one man, and that despite the extradition and the enormous pressure, WikiLeaks will continue… I hope Julian Assange gets a fair hearing (in Sweden)… No matter what happens I feel confident people will continue to stay focused on Manning’s case.”

Paterson founded the group Courage to Resist, which according to a document on its website, has raised nearly $400,000. The majority of that money pays for Manning’s private legal counsel, Paterson said, and the rest pays for numerous protests the group has staged in support of the soldier. WikiLeaks contributed $15,100 in January.

Trevor Timm expresses concern that should Assange be extradited to the U.S. for WikiLeaks related charges, that it could “send a chill through journalism”.

Most ironically, however, the article quotes infamous hacker Adrian Lamo as criticizing Julian Assange for his perception that Assange “hung him [Bradley] out to dry.” As members of the Bradley Manning Support Network we’d like to point out that it was in fact Adrian Lamo, not Julian Assange, who turned over Bradley’s information to the FBI. And that U.S. government officials bear ultimate responsibility for retaliating against Bradley for allegedly exposing widespread evidence of wrongdoing. Link.

Congressman Ron Paul argued last weekend that Bradley Manning and Daniel Ellsberg, are important whistle-blowers that are “trying to bring transparency to the country.” The article goes on to state that revealing the truth of the governments foreign policy is helping to contribute to “the radical but principled idea that lies at the core of a free society: That government should not be above the moral and universal laws that apply to private citizens.” Link.

Ron Paul continued to praise Bradley Manning, calling him a hero, and arguing that it was only through whistle-blowers and WikiLeaks that the public was able to learn the truth about the war,

“… we get information from groups like WikiLeaks confirming the fact that we actually went into Iraq and there was no Al Qaeda, no weapons of mass destruction, it was all a gimmick to get us into a war that we didn’t need to be in,” Paul added. “The best way to prevent this kind of dilemma for us getting the information after the fact, is we should have the information before the fact,” said Paul. “That is we should never go to war without a full examination and a declaration of war.”

Whistle-blowers like Bradley Manning are essential to the country, he argues. It is only through whistle-blowing that the public has a chance to learn the truth when its government’s policies are secretive and intensely protected. Link.

We’d also like to mention that today, November 5th, is Guy Fawkes Day. Guy Fawkes gained symbolic importance to the new democracy movement through author Alan Moore’s V for Vendetta in which a man who fights a totalitarian government in a dystopian future wears a Guy Fawkes mask. Here is a statement Moore made over the summer in support of Bradley Manning and Anonymous, for anyone who missed it.