Thursday, March 15th is the date of PFC Bradley Manning’s next appearance at Ft. Meade, MD. During this motion hearing, the dates of Bradley’s future hearings and court martial will be determined. The defense has requested that the court martial begin in May, while the prosecution is requesting an August start date. Considering that Bradley has already been forced to endure over 650 days of pretrial imprisonment, including eight months of solitary isolation, we see this effort to push back the date of the trial even further as yet another violation of his rights and another example of the military’s “kangaroo court” justice. While Bradley stands in court, we will show our support by standing at the front gate of Ft. Meade. Our vigil will take place from 7-9am, when reporters are most likely to be taking photos. (You can find directions to Ft. Meade here.) 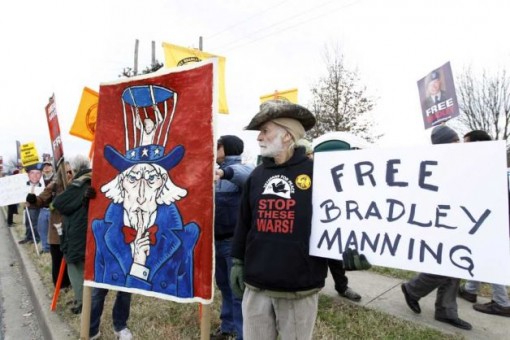 Supporters not located near Ft. Meade can participate in a simple act of solidarity:

Organize friends and colleagues to gather on March 15th by a busy road, holding signs of support for Bradley Manning. Suggested messages include “Free Bradley Manning,” “Blowing the whistle on war crimes is not a crime,” and “No show trial, no life in prison for accused whistle-blower.” Please include our URL (bradleymanning.org) on the bottom of your posters, to ensure that people driving by know where to learn more if they are interested.

Take “I am Bradley Manning” photos with your friends, and submit them to iam.bradleymanning.org

We call for these actions in solidarity with Sunshine Week, a national initiative to promote a dialogue about the importance of open government and freedom of information. We believe Bradley Manning is Sunshine Week’s ultimate icon, as the actions attributed to him have shined more light on the inner workings of the U.S. military and state department than anything else in the “War on Terror” era.

Thank you for supporting Bradley Manning!