In new defense motions to be argued at Bradley Manning’s motion hearing July 16-20, David Coombs argues the prosecution is treating Bradley more harshly than they would a terrorist. Read about the motions below, and learn more about attending the hearings at Ft. Meade! 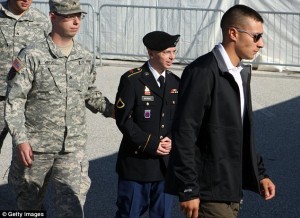 Bradley Manning escorted into the courtroom in Ft. Meade, MD.

PFC Bradley Manning’s next motion hearing at Ft. Meade, though brief, could significantly alter how the case unfolds from here on out. For one thing, we expect military judge Denise Lind to give a definitive new date for the court-martial itself to commence – after a delay was announced, the defense began pushing for a November start date, while the prosecution requests that the trial start in February 2013 or later. More significantly, though, is the defense’s motion asking Judge Lind to instruct the prosecution regarding the “aiding the enemy” charge.

The prosecution contends that Manning can be charged with “aiding the enemy” if he merely knew that a third party, and in this case America’s enemies, could access information he released online. But Coombs argues, as the ACLU has argued, that this is wildly overbroad, leaving any information a soldier posted online vulnerable to this type of prosecution.

As Coombs posted on his blog, the defense motion to be argued next week asks Lind to instruct the government on the Article 104 charge as follows:

Coombs reminds Lind that the court previously held that “an accused must have actual knowledge that he is giving intelligence to the enemy in order to be convicted of a violation of Article 104(2).”

Furthermore, Coombs points out that – in a trial more secretive than military tribunals at Guantanamo – the prosecution’s interpretation is broader than that used to currently prosecute suspected terrorists.

Clearly, the prosecution is trying to set a broad precedent to make an example out of Bradley Manning, to restrict soldiers’ rights and intimidate would-be whistleblowers in the future.

In a second motion, Coombs renews the defense request to dismiss specifications for failure to state an offense. These specifications, known as the 1030 specifications, allege that PFC Manning “exceeded authorized access” in using his computer to release classified files. In a semantic but important debate at the June 6-10 hearing, Coombs contended that this phrasing mischaracterizes the alleged action so as to create a non-existent offense. He says Manning instead had proper authorization to use that computer, and that any violations he may have committed fall under that access. He argues the prosecution is piling on charges by alleging Manning “exceeded authorized access” on a computer that he was allowed to use. Therefore, he motioned to dismiss the specifications alleging Manning “exceeded” his access.

Coombs is now renewing that motion in light of the government’s most recent definition of “exceeds authorized access.” However, due to military redactions, we don’t know what that new definition is.  Coombs’ renewed motion says that the government provided its “definitive” theory on “exceeds authorized access” in a “moment of uncharacteristic clarity,” yet the theory itself is blacked out. However, Coombs does say, “At no point in its response did the Government contest that PFC Manning was authorized to access each and every piece of information he allegedly accessed.”

As Coombs notes, the court as already decided upon a narrow definition of “exceeds authorized access,”

However, unfortunately, Coombs says the prosecution’s “definitive” theory on the matter “did not stay definitive for long.” The government, he says, introduced a new theory “entirely absent” from its previous response. Under this new theory, the prosecution, will “attempt to show that PFC Manning exceeded his authorized access by using a particular unauthorized computer program – Wget – to download information that he was authorized to access onto his computer.”

Wget is a computer program that retrieves content from web servers that “was not apparently officially authorized for the individual user,” but “was authorized for use on the Army Server components of the system.” Coombs concludes his summary of the government’s newest theory regarding Wget:

Even while hinting at this new theory at the eleventh hour, the Government still did not dispute that PFC Manning was authorized to access all of the information he allegedly accessed.

The third defense motion is a “targeted brief on absence of harm,” regarding the prosecution’s motion to preclude the defense from discussing the alleged damage, or lack thereof, caused by WikiLeaks’ releases. The prosecution admitted on June 6 that it does not intend to produce any evidence of damage caused by WikiLeaks’ releases during the merits (innocence or guilt) portion of Manning’s trial. So instead it seeks to preclude the defense from arguing that no damage has been caused and to contend that alleged damage caused is irrelevant in determining Manning’s guilt.

This is likely because the government doesn’t have evidence proving WikiLeaks harmed national security. As Coombs observes, the prosecution has been dealing with the speculative idea that WikiLeaks could cause damage. Fed up, Coombs argues that we must deal with empirical proof:

Anything “could” happen – the world “could” end tomorrow; Kim Kardashian “could” be elected president of the United States of America; I “could” win the lottery. These are not the types of “could” that l8 U.S.C. Section 793 contemplates. Therefore, the Defense should be able to probe whether the witness’s testimony that the information could cause damage to the United States is remote, speculative, far-fetched and fanciful by examining such witnesses on the fact that two years after the alleged leaks, the conclusion is still merely that the information “could” cause damage – not that it “did” cause damage.

Last month, Judge Lind took the prosecution’s motion to preclude under advisement. In the defense’s response, Coombs asks Lind to deny the motion for four reasons:

l) the Government’s request is overbroad;

2)the information from the damage assessments is proper impeachment evidence;

3) the information from the damage assessments is relevant to the charged offenses; and

4) the information from the damage assessments provides a viable defense.

Coombs quotes the government frequently, and those arguments are again often redacted. We can see, though, that he refers to those who’ve spoken on WikiLeaks’ alleged damage such as Defense Secretary Robert Gates, who said the release’s consequences for foreign policy were “fairly modest.”

This motion hearing might only last for a few days, but Judge Lind’s rulings on these matters could portend significantly for the legal proceedings to come. If you’d like to attend Manning’s hearings at Ft. Meade, read about logistics here. Manning has previously thanked supporters for their steadfast solidarity and advocacy on his behalf.