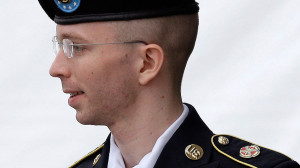 Though the majority of her ruling sided with prosecution arguments, military judge Col. Denise Lind granted in part a defense motion to merge some of the specifications against Pfc. Bradley Manning for sentencing, reducing the maximum sentence he could receive from 136 to 90 years in confinement.

The defense proposed combining the theft of the Iraq and Afghan War Logs (contending that those occurred at the same time), the theft and computer fraud of the State Department cables (because computer fraud was committed in order to download them), and combining the theft and transmission of the war logs (as the government has previously argued that the theft occurred under the “knowingly converted” theory when the documents were sent to WikiLeaks). It also moved to merge charges that Manning committed computer fraud with the Army regulation violation, because both involved introducing the unauthorized ‘Wget’ to his work computer.

Update: Thanks to Kevin Gosztola, for scanning and posting a copy of the ruling here.

In a second ruling, Judge Lind ruled largely in favor of the government, against the defense’s motion to limit the scope of “aggravating evidence” allowed during sentencing.

The trial counsel may present evidence as to any aggravating circumstances directly relating to or resulting from the offenses of which the accused has been found guilty. Evidence in aggravation includes, but is not limited to, evidence of financial, social, psychological, and medical impact on or cost to any person or entity who was the victim of an offense committed by the accused and evidence of significant adverse impact on the mission, discipline, or efficiency of the command directly and immediately resulting from the accused’s offense.

The judge ruled broadly that each of these do constitute proper aggravating evidence as they result “directly” from Manning’s actions, with the notable caveat that she will disregard Amb. Michael Kozak’s opinion on the diplomatic cables release’s “chilling effect,” as it was speculative. She said that proceeding forward will require “fact-specific” inquiries: the defense can continue to object after each witness, the government will respond, and then the judge will rule on what she will consider proper evidence.

Maj. Gen. Michael Nagata, from the Pentagon’s Joint Staff and formerly of the Office of Defense Representative Pakistan (ODRP), is testifying in a closed session about how WikiLeaks’ release of State Department diplomatic cables affected U.S. relations with Pakistan.

In a brief open session, Maj. Gen. Nagata testified that the U.S. had been “predictably benefiting from a great deal of gratitude & goodwill” in Pakistan in the latter half of 2010, after providing a “great deal” of humanitarian aid after the massive flood that submerged 20% of Pakistan’s land mass underwater.

Maj. Gen. Nagata said that the U.S. relationship with Pakistan had been on a “very positive trajectory” in October and November of 2010, though not without “friction” or other problems. He said this was because the Pakistani military was becoming “increasingly aware” that “violent extremists” were becoming an “existential threat” and realized that they needed U.S. help.

We don’t know much about what Maj. Gen. Nagata will discuss in the closed session. Prosecutors indicated they intended to elicit testimony regarding his role in the ODRP from 2009 and 2011 and the impact that WikiLeaks’ releases had. The defense did not cross-examine him in an open session, but with other witnesses has worked to show that the relations at issue were already fraught.

The defense may do the same with Pakistan. The United States has been conducting covert drone strikes in Pakistan since 2004. Last week, the Bureau for Investigative Journalism reported on new revelations regarding the U.S.’s use of drones in Pakistan to strike worshippers in mosques, mourners grieving at funerals, and rescuers retrieving the dead.

The Defense Intelligence Agency’s Attache in Pakistan from November 2010 to October 2012, Col. Julian Chesnutt is now testifying in a closed session after he was questioned in open court for just ten minutes. As former military advisor to the U.S. Ambassador to Pakistan, he will testify about the impact of WikiLeaks’ release of U.S. diplomatic cables