On the final, brief day of this motion hearing for Bradley Manning in Ft. Meade, Judge Denise Lind largely ruled against the defense’s motions to dismiss specifications of charges against Bradley. Given extensive delays in the prosecution’s handling of discovery material, the court martial trial will now be pushed back until November or January. Also see notes from day one and day two. 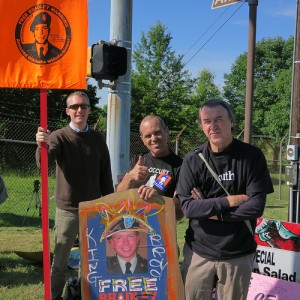 Today’s motion hearing, the final of this session, began at 11 AM. Judge Lind first observed that new discovery requests would push around some of the scheduled hearing dates. The June 25 interim date stands, as do the July and August hearing dates, but the September session and the court martial trial itself are in flux. Lind said the trial would likely have to start in November or even January, as the court wants to avoid a holiday-season trial.

Defense motion to dismiss due to vagueness denied

Lind moved quickly on to rule on the defense motion to dismiss specifications due to vague phrasing. She acknowledged that the law cannot be so vague so as to afford or encourage indiscriminate or arbitrary enforcement, but she said case law, including 1988’s US vs. Morrison, upheld broad understandings of “relating to the national defense” and “to the injury of the United States” as constitutionally specific enough. She denied the motion.

Defense motion to dismiss for failure to state an offense denied

After a short recess, Lind said Coombs had submitted the requested addendum to his discovery request. Then she ruled on the defense motion to dismiss for failure to state an offense, based on the phrase “exceeding authorized access.” Lind synopsized yesterday’s lengthy argument on the motion, and she gave her analysis of the split 50/50 case law on the matter. Half of case law says the phrase refers to access only, and the other half says it can apply to how one uses the computer. Ultimately, Lind agreed with the defense’s interpretation that the phrase is meant not to define computer access but instead use of information therein. The phrase is meant to criminalize hacking, and so shouldn’t apply to authorized access. She said case law holds that exceeding authorized access “doesn’t extend to breaching terms of use.”

However, Lind observed that the prosecution has said it intends to provide more evidence on the matter if it survives to trial. She said this cannot be dismissed with further evidence yet to be produced, and that the prosecution would have to use a limited and narrow version of the phrase in their argument. Because she’s allowing the prosecution to present this evidence, the motion was denied. We recessed for a long lunch break.

Coombs says prosecution has no new evidence to produce

When returned at 2:30 PM, the defense’s David Coombs immediately addressed the previous ruling. He said that the evidence the prosecution intends to produce at trial is not going to change its argument, and that it will only further its case that Bradley exceeded his authorized access by violating terms of use. Seeming almost to undermine her own ruling prior to recess, Judge Lind said, “Know that in my ruling I don’t see use and access as mutually exclusive.”

Coombs replied that the defense would argue consistent with the cases she cited in her ruling, using a limited and narrow interpretation of “exceeding authorized access.”

Lind moved on to rule on the defense motion to dismiss lesser-included offenses, which was argued yesterday. She said the defense and prosecution had (privately) agreed that some of the specifications were lesser-included offenses, namely specifications 13 and 14 of charge 2, and clauses 1 and 2 of Article 134, but that others remained in dispute, namely 2, 3, 5, 7, 9, 11, and 15 of charge 2.

Lind agreed with the prosecution that conduct prejudicial to good order and discipline was not a lesser-included offense in Article 134, so that part of the defense’s motion was denied.

She said clauses 1 and 2 are lesser-included offenses of clause 3, and so barring a government motion to reconsider, that defense motion was granted in part.

This brief session marked the end of this Article 39 motion hearing, and we were dismissed.

Please contact Nathan Fuller at [email protected] with any questions or corrections to make. Thank you for following the Support Network’s coverage. Find us on Facebook and Twitter, and please donate to the campaign if you can.