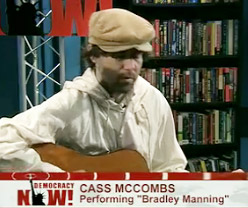 When Bradley moved back from western Wales
His Okie accent still wouldn’t fail
Sleeping in his pickup truck, his Soul wouldn’t calm
He wrote to his mother, “I’m nobody now, Mom”

Today, those who got up in Bradley’s face
Wish to remain anonymous, in their disgrace
They spread rumors around he wet himself scared
Even if that’s true, I don’t really care

“Recycled” from Iraq and stationed at Fort Drum
His boyfriend introduced him to Triskelion
He met the hacktivists at MIT
“Randomly hung out with some pikans”; “At last, people like me”

Deployed to Base Hammer, near Iran
Built from freight containers and sheer boredom
The bullies on the base went in for the kill
They said, “We have a saying here: Shit rolls downhill”

On leave in Boston, but his boyfriend had flown
Bradley wrote him on Facebook: “I have no real home”
And before the Builds launch party, he went on to vent:
“Bradley Manning is not a piece of equipment”

While passwords are written on sticky notes
And stuck to laptop screens, Bradley explodes
Found in a storeroom stabbing a chair
Bradley carved, “I want…” with a passion that’s all-too rare

Now he’s due to be court-martialed this December
To prove bullying is better than a wild temper
Now, when we say “I want”, we invoke his chair
Bradley, know you have friends, though you’re locked in there

Ahead of Manning’s first court date, Cass McCombs also did an instrumental version of the song this morning on Democracy Now!