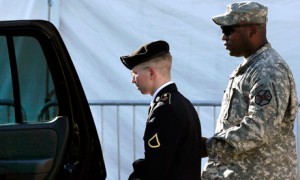 On Monday, June 25, Bradley Manning’s defense won a battle over discovery documents the prosecution has been hiding throughout the trial. Ed Pilkington details the legal victory for the Guardian:

In Monday’s hearing, Coombs crystalised his objections, accusing the prosecution lawyer army Major Ashden Fein of failing to afford Manning a fair trial. “Normally, these games are not played. You hand over discovery and let the facts speak. You don’t play hide the ball, and that’s what the government’s been doing,” Coombs said, according to a report by the Associated Press.

By ordering the prosecution to prepare a “due diligence statement”, the judge is casting a light on what the prosecution has – or has not – done to disclose evidence to the defence. She gave the army until 25 July to draft the statement.

Lind also came down on the side of Manning when she ordered the military prosecutors to hand over to the court so-called “damage assessments” prepared by a range of government agencies including the CIA, FBI, state department and the Office of the National Counterintelligence Executive, Oncix.

Kevin Gosztola further discussed the due diligence order with RT:

Journalist Alexa O’Brien was threatened with arrest and loss of credentials for investigating at Fort Meade. O’Brien, who has covered Bradley Manning’s trial in detail from its inception, was attempting to learn why the press room at Ft. Meade was closed during Bradley’s most recent motion hearing. When she started asking questions, Ft. Meade personnel told her she was being “disruptive,” that she’d broken rules, and that she could be arrested or have her credentials revoked.

O’Brien recorded audio of her discussions and included the recordings in her report of the incident.

This is far from the first account of journalist-intimidation at Ft. Meade. In fact, working to winnow out media access has been the general rule for Bradley’s trial. Rainey Reitman chronicled early media access problems for the Nation, expanded on by Nathan Fuller.

Shayana Kadidal has written about how the façade of access to Manning’s trial is more insidious than a full media blackout, which would stir controversy whereas choking off access slowly just makes it difficult to cover. Kadidal is a lawyer for the CCR, which is legally petitioning the military for public access to court documents. That petition was rejected, but the CCR is filing an appeal with the Court of Appeals for the Armed Forces.