As mentioned in our last news update, Judge Lind has given us a new calendar for future proceedings.  Please take note:

You can read our summaries of last week’s hearings by Day 1, Day 2, and Day 3 as well as a complete summary provided by the UK Guardian.

Next week, 28 cities across the country plan to stage their own event in the court of public opinion, by protesting at Obama 2012 campaign offices if he fails to respond to a letter of demands put forth by the veterans arrested during the August 16 sit-ins.  The letter asks for Bradley’s torture at Quantico to be accounted for, and for President Obama to pardon him.  It goes on to explain:

In order to uphold campaign promise to create the most transparent government in history, the President must recognize PFC Manning as a whistle-blower and remedy the injustices he has faced over two years in U.S. military custody…

Bradley Manning served with conscience. Words attributed to him in May 2010 show he acted because
he wanted “people to see the truth… because without information, you cannot make informed decisions
as a public.“ President Obama made a similar statement in May 2011, when he stated, “In the 21st
century, information is power; the truth cannot be hidden; and the legitimacy of governments will
ultimately depend on active and informed citizens.” We now ask that President Obama honor those
words by freeing American truth-teller Bradley Manning.

The actions planned for September 6 have been promoted by the Bradley Manning Support Network, Veterans for Peace, Iraq Veterans Against the War, Afghans for Peace, Firedoglake, World Can’t Wait, CodePink, and the Alliance for Global Justice.

People have contributed many ways to the campaign over the past two years: fundraising for the legal defense, organizing actions, and writing letters to the editor.  Making art is another way people have helped to spread the world about alleged WikiLeaks whistle-blower Bradley Manning.  This week, an art collective by the name of the Fresh Juice Party has produced an amazing chalking in Oakland, CA: 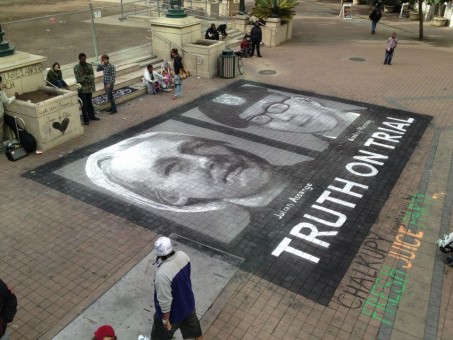 There are also two new songs to check out. Both represent very different styles of music, and both are dedicated to Bradley Manning.

Oh, Bradley from benh.am on Vimeo.